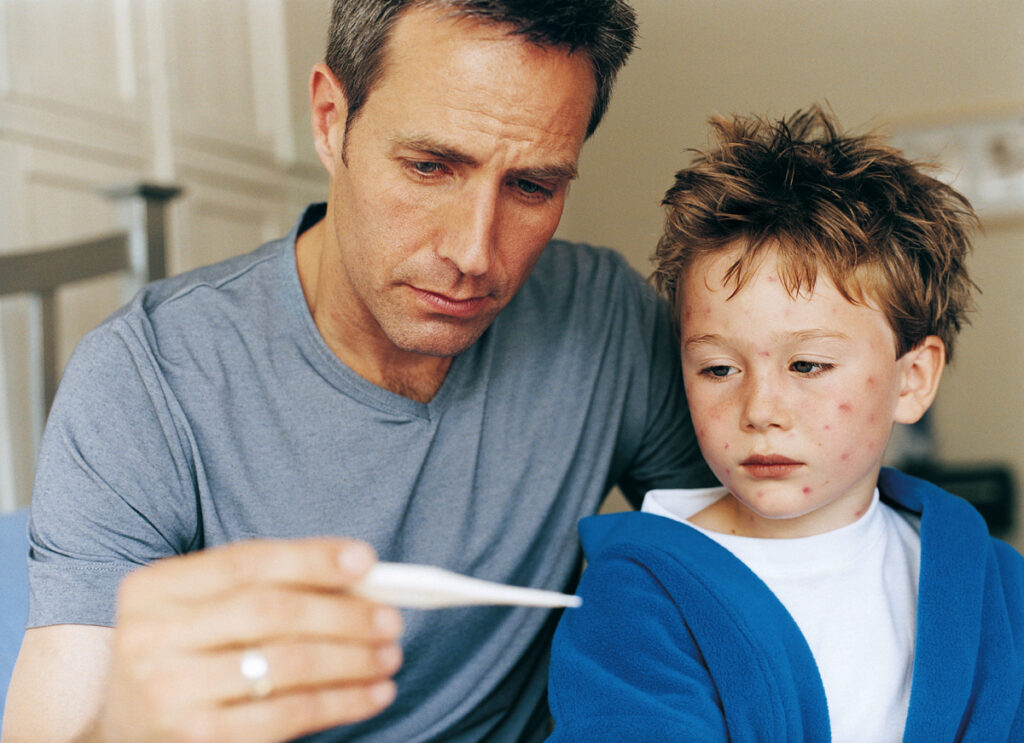 Many of us remember getting chickenpox as kids. For most, it wasn’t so bad. A few days off school, an itchy rash, temperature, runny nose and headache. And then it cleared up and your childhood continued as normal.

While it may not have been that bad for you, it affects people differently. Chickenpox is a dangerous disease, even deadly for some. Prior to chickenpox vaccination being introduced into Australia, there were approximately 240,000 cases and 7 deaths each year from chickenpox. Life-threatening complications such as pneumonia or encephalitis can be caused by chickenpox. So, it’s important not to be complacent.

Read on to the get the lowdown on chickenpox and why we vaccinate against it.

Chickenpox is caused by the varicella-zoster virus (it is also known as the herpes zoster virus). And it is highly contagious, so it spreads very easily from one person to another.

Symptoms will normally appear around two weeks after being exposed to the virus. If you have chickenpox, it starts with a sudden onset of slight fever and cold-like symptoms. This includes headaches, a runny nose and a cough. A day or two later, a rash appears across your body, starting with pink blotches that turn into itchy blisters. Three to four days later, the blisters begin to dry out and then scab up.

In the early stages of the sickness, the virus is spread by coughing. Though later on, it is spread by contact with the fluid from the blisters. If you have it, you are infectious from before the rash appears and up to five days after (when the blisters have scabbed over).

If you or your kids have chickenpox, then avoid others (so don’t go to your workplace, childcare or school) until all of the blisters have dried.

Who is at risk from chickenpox?

Anyone can get chickenpox, but it is more common in kids. For most children, chickenpox is generally a mild, but uncomfortable illness. Despite this though, most hospitalisations occur in healthy children under the age of 5. Another risk for kids is that scratching the rash can leave permanent scaring.

Chickenpox is usually much worse in adulthood. It can also lead to shingles if you catch it again later in life, which is more serious again. Shingles occurs when the virus, which stays in the body after you have had chickenpox, becomes active again. It can cause a very painful rash across one side of the body, on the face, chest, back, abdomen or pelvis. This rash can last for weeks. In some cases, shingles can even cause Ramsay Hunt syndrome, which can cause facial paralysis and hearing loss. Vaccinating children against chickenpox can reduce their risk of developing shingles as adults.

Chickenpox can also be dangerous for unborn babies if the mother catches it during pregnancy. If this happens late in pregnancy or soon after birth, the infection can be life threatening for the bub.

How does vaccination work?

The best way to prevent chickenpox is through vaccination. The vaccine is both safe and effective. It prevents almost all severe cases of the disease.

The chickenpox vaccine contains a weakened version of the virus. After vaccination, the immune system makes the antibodies and memory cells needed to provide long-term protection against infection. If the body comes into contact with the real virus, the immune system then has a strong, quick response to the virus. This will either stop it from developing or it will limit the severity of the disease.

Vaccination doesn’t just protect you. Widespread vaccination protects your whole community. Vulnerable people who are unable to get the vaccine rely on those around them to be vaccinated, limiting their contact with the disease (like a buffer zone). This includes babies who are too young to have had their shots, people with a suppressed immune system or those who are pregnant.

What should I do if I’m not vaccinated or my children aren’t vaccinated?

If you or your kids aren’t vaccinated, talk to your doctor or immunisation provider as soon as possible about getting immunised. Children who have previously had chickenpox should still receive the vaccine (as part of a measles, mumps, rubella and varicella (MMRV) vaccine. You might also like to know that the Queensland Immunisation Schedule provides a free MMRV vaccine to all kids at 18 months which covers chickenpox.

If, as an adult, you have had chickenpox before, you don’t necessarily need to receive the vaccine but it won’t harm you if you do.

If you want to find out if you or your child has previously had a chickenpox vaccination, you can click here. If you have any other questions, talk to your doctor or immunisation provider.

How to stop the spread of vaccine misinformation

Right now, we’re all being bombarded with a huge amount of information about the new COVID-19 vaccines. However, in such a hotly debated topic, you…

The 2021 flu vaccine and why it’s so important

One of the few surprisingly positive effects of the COVID-19 pandemic is that there were significantly less cases of flu in Queensland than previous years….